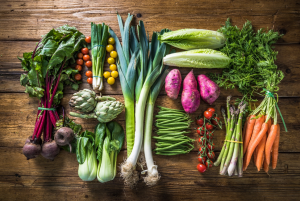 Whole, unprocessed foods are necessary for any healthy diet. You might have even heard of the “Dirty Dozen” – the twelve fruits and vegetables that tend to have the highest pesticide concentrations. Want to avoid toxic ingredients and make recipes with delicious, healthy veggies and fruits? Keep reading to learn about what foods to buy organic what you can, and what nutrients they provide

Spinach is one of the healthiest foods you can eat. It’s full of vitamin K, vitamin A, manganese, folate, copper, B2, B6, vitamin C, and calcium. Unfortunately, spinach often has more pesticide residue by weight compared to other veggies and fruits.

You can get organic spinach leaves fresh or frozen and add it into salads or savory dishes.

Strawberries are full of folate, potassium, manganese, and vitamin C. According to one study, more than 90% of strawberries tested had pesticides. If you’re concerned about these potential toxins, it makes sense to pay extra for organic.

Kale isn’t called a superfood for nothing. It’s full of calcium, potassium, manganese, and copper. Plus, it has large amounts of vitamins K, B6, A, and C. Again, this is another vegetable where conventional types tested positive frequently for pesticides. Some samples had more than 18 different kinds of pesticides.

Who doesn’t love potatoes? You can mash them, put them in a stew, or fry them! Besides being delicious, they’re also replete with B vitamins, minerals and vitamin C. Unfortunately, non-organic potatoes might have serious amounts of pesticide residue on them.

Celery has a low glycemic index in addition to folate, potassium, and vitamins A, K, C. But be careful, if you don’t buy organic, you’re at risk of consuming pesticides. In one test, more than 95% of conventional celery had pesticide residues.

In tomatoes, you’ll find vitamins A, C, B2, folate and chromium. A normal, non-organic tomato tested for, on average, four different types of pesticides. One tomato sample tested for 15 different pesticides.

You can easily find organic tomatoes at most grocery stores as well as canned versions.

Chock full of fiber, vitamin C, vitamin K, potassium, and copper, pears offer a natural sweetness to any dish. Unfortunately, many pears are grown with pesticides and many were found to have pesticide residues upon testing.

Vitamins, minerals, and fiber – cherries have it all. It’s best to buy organic because on test found a potentially carcinogenic pesticide that’s already banned in Europe.

If you eat a peach, you’ll get a nice helping of zinc, copper, magnesium, potassium, iron, and vitamins E and K. Unfortunately, a staggering 99% of peaches designated as non-organic had pesticide residue. 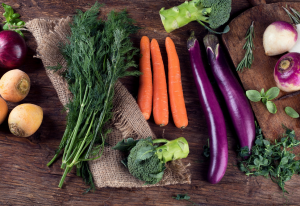 Grapes are incredibly versatile. You can make wine with them, eat them fresh, or press them into juice. When you eat a serving of grapes, you’ll get a large dose of healthy antioxidants.

Conventional grapes have a high likelihood of being contaminated by pesticides, so it’s much better to buy organic when possible.

Replete with fiber and vitamins, apples are a very nutritious food. It’s no surprise if you think about the saying, “An apple a day keeps the doctor away.” But if you buy non-organic toxins, you have a high chance of ingesting pesticides.

Nearly all the nectarines tested that weren’t organic were found to have traces of pesticides.

However, if you can buy organic, you can avoid those potential contaminants and get a healthy dose of Vitamin A and Vitamin C.

Believe it or not, CBD can be contaminated if you don’t buy organic. CBDfx makes organic CBD capsules, for example, so you don’t have to worry about pesticide residue.

Peppers are another vegetable to buy organic if at all possible. Conventional hot peppers were found to have problematic amounts of pesticide residue.

What else can I do to avoid pesticides?

If you’re concerned about the toxic nature of pesticides, you can also consider starting your own community garden and growing your own produce. It’s also good practice to wash any fruits and veggies you buy from the grocery store, so you can wash off any residual pesticide chemicals.

The next time you’re at the grocery store, consider buying organic for the fruits, vegetables, and supplements mentioned in this list. You’ll have total peace-of-mind that you and your family are eating healthy and as naturally as possible.