Food and Pregnancy Tips from Jan Rydfors MD, Co-Founder of EmbraceHer, creators of the app, Pregnancy Companion: The Obstetrician’s Mobile Guide to Pregnancy

Is it safe to have coffee while pregnant? Limited intake of caffeine appears to be safe, and medical studies do show that up to 200 mg per day is most likely fine. Higher amounts might increase the risk of having a miscarriage or inducing early labor, so I suggest you stay below the 200-mg/day limit. For popular drinks, an 8 oz. cup of coffee has about 100 mg of caffeine, an Espresso has 65 mg and a diet coke has about 45 mg. For you tea drinkers, a cup of regular tea has about 50 mg. Finally, for the Starbucks junkies out there, a Starbucks tall (12 oz.) Cappuccino and Latte each have 75 mg.

Is sushi safe during pregnancy?

Sushi is very popular today and my patients tell me that it tastes even better when one is pregnant! I always get inquiries about this. In the US, women are told to not eat sushi when pregnant but this absolute “no-no” regarding sushi is probably not completely correct. Japanese women certainly don’t seem to restrict it during their pregnancies. There are some justifiable concerns about the high mercury in some of the fish used such as tuna, mackerel, swordfish and blue marlin. You might be surprised about tuna being included in this list but this is due to the preference for using very large tuna when making sushi. Generally the larger the fish, the more mercury it contains. Eel, shrimp, crab, fish eggs and scallops have usually acceptable mercury levels. The concerns for bacteria and parasites in sushi are also not correct. Most fish used for sushi in the US, per FDA guidelines, have been flash frozen when caught. This kills the bacteria and parasites present in them.

So, do have your sushi but stay away from the high mercury containing fish. Only eat fresh sushi from a reputable restaurant and source, as you do not want to ingest any Listeria bacteria, which can infect your baby.

Can I have a glass of wine during pregnancy?

This is a tough one. In France and southern Europe, pregnant women will frequently have a little wine with dinner. Fetal alcohol syndrome is however real and the guidelines from the American Congress of Obstetricians and Gynecologists (ACOG) state unequivocally that there is no safe amount of alcohol to drink. Many of my OB colleagues are a little more lenient. They tell their patients that after the first trimester, an occasional half of glass of wine with dinner probably poses very little risk to your baby but do not drink multiple glasses per day, no matter what stage of gestation. 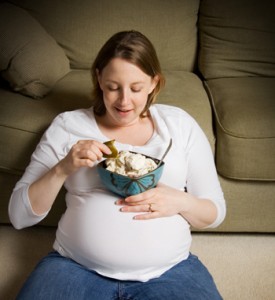 Dr. Jan Rydfors is a Silicon Valley-based board certified Obstetrician and Gynecologist (OB/GYN) specializing in fertility and high risk pregnancy. He is the Co-Founder and Chief Medical Advisor of EmbraceHer,creators of the popular Pregnancy Companion app.  www.embracehealth.co