The guys who brought us Baconnaise and the head of Conan O’Brien encased in pork have just launched a new empire of bacon-themed intrigue: Bacon Coffins.  That’s right, the world’s first bacon-wrapped caskets.

According to the company, “J&D’s Bacon Coffin™ is For those who love bacon to death.”

Bacon Coffins are “finished with a painted Bacon and Pork shading and accented with gold stationary handles. The interior has an adjustable bed and mattress, a bacon memorial tube and is completed in ivory crepe coffin linens.”

You’ll be the most swank dead person on the strip.

Funerals are big business. Since approximately 56 million people die per year worldwide, 2.4 million in the US alone – J&D estimate (scientifically, naturally) that 99% of them lived in the days of swine and roses.

And for only $2,999.95 + strip-ping and hamling (my pun), you can rest wrapped in the meaty arms of the everlasting slumber.

Still, what about those of us who don’t plan to go…  down under for eternal rest? Justin and Dave are missing out on three potential sellers:

Viking Funeral Strip Canoes: For those who like their bacon well-done.

Memorial Plaques:  To err is human; to forgive porcine.

Don’t look at me like that. You know you want one. 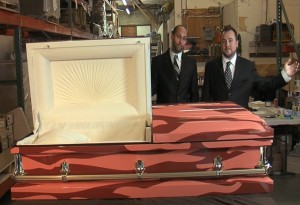 What do you say? Does this swine swag make you more determined to kick the bacon in style? Leave a comment below and let me know.