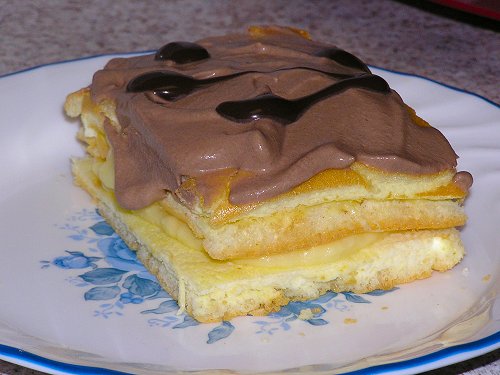 The Good News About Chocolate

I was the best day ever for chocolate lovers everywhere when we found out that chocolate has health benefits.

Whether it’s in the form of chocolate coating a cookie, in coffee, or even in this decadent, low-carb Boston Cream Napoleon recipe, chocolate gives us something to celebrate.

But before this, chocolate was first enjoyed about 3,000 years ago by the Mayans and Aztecs of Central America and the Incas of Peru in the form of cocoa. Cocoa beans are from the seedpods of the cacao tree, which is native to Central and South America. The Mayans, Aztecs and Incas used to drink cocoa with spices and powdered maize and considered it a gift from the gods. When Hernando Cortes swept into the New World, he too discovered the cacao fruit and introduced chocolate to Spain around 1520. The Spanish kept the source of chocolate a closely held secret till the Dutch figured it out and brought the tree to Sri Lanka and the Philippines.

The seedpods of the cacoa tree grown on the trunk and the main branches. When they’re ripe, they’re picked then split open. Each seedpod has between 20 and 50 cocoa beans and processing them is labor intensive. About 400 beans are needed to make one pound of chocolate!

The cocoa beans are then fermented with yeast, which takes away the bitterness and activates enzymes that bring forth the chocolate flavor. Then, the beans are dried and roasted from between 30 minutes and two hours. After that, the cocoa beans are crushed and reheated. This liquefies the beans so they can be poured into molds. If the liquid is allowed to solidify, it turns into unsweetened chocolate. Otherwise, the liquid is squeezed by presses that remove the cocoa butter. What’s left behind is sifted into cocoa powder that’s turned into the sweet chocolate people crave.

As for craving, chocolate has about 300 chemicals and many of these chemicals do work on the brain. Among the chemicals is caffeine. Theobromine, another stimulant, is also present as is phenylethylamine, which is related to amphetamine. Add these to the high fat and sugar content of a chocolate bar as well as histamine, cannabinoids, serotonin, tryptophan and one gets a steady flow of endorphins, the brain’s natural opiates.

Many chocolate lovers have their favorite brand, but a chocolate bar should be crisp and not be flexible. It should also not be sickeningly sweet while having a rich and sensuous taste.

Now, here are the health benefits. Dark chocolate has been discovered to be rich in phenolics, some of which are known to lower a person’s risk of cardiovascular disease. They do this by preventing fats from clinging to the lining of a person’s arteries and clogging them. Research is still ongoing into chocolate being useful in the prevention of cancer and the treatment of migraine headaches.

As for chocolate being an aphrodisiac: there’s no proof yet, but we don’t need any.