Cola is legally sold anywhere you look, gas stations, grocery stores, restaurants.. everywhere! So it is strange to think that cola can be linked in the same league as taking heroin. These drinks cause more deaths every years than illegal drugs, and they also add billions of dollars to your health bills through the diabetes, cancers, and heart diseases they are causing.

The major risk of soda is that it can cause of worsen diabetes. This disease is responsible for 133k of the 183k deaths associated with the drinks. In addition there are 44k deaths from cardiovascular disease and 6k from cancers, all from people who share in common drinking soda.

In the United States alone, 25k people die from regularly drinking soda, compared to 18k who are murdered, and 20k people who die from taking illegal drugs.

These grim results might actually be optimistic, the Harvard researchers warned. Their research focus on the deaths related to soda for adults, these figures could be much worse if children and teens were included since they probably drink more sugary drinks than any other age group.

So how much soda is safe to be consumed? If the Harvard research is to be believed, that is like asked how much cocaine can I safely have every day! When you drink cola your metabolism begins to change within 30 days. Your insulin resistance will increase and you will start to put on weight. These are the precursors to diabetes and heart disease. 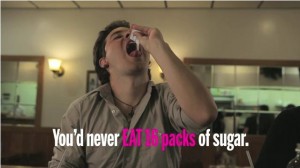 What about diet sodas? These are usually sweetened with aspartame, and as you know, this chemical is about as liked as measles and is also deadly. Aspartame is linked to every major chronic disease, especially cancer and heart disease. People have even marched at the White House to ban aspartame!

There is a good use for aspartame though, ant killer! It works better than most deadly poisons made to kill ants. Simply sprinkle a couple of packets in the corner of the rooms or garage you found the ants in, and they will disappear. However, it is recommended to wear gloves while doing this, I mean you wouldn’t want to mistakenly ingest this stuff after all.

I did drink the occasional soda as a child. It was not kept at home, but it was like a treat I would buy myself, along with candy from the corner store if I saved up enough money that week. I was young an did not know any better, so there is my excuse. As an adult at first I stayed away from it for vanity reasons… wow that is a lot of calories and sugar, I can’t drink that! I later discovered while attending college that these chemicals are insanely harsh and dangerous! We did learn of other uses for these chemicals though through experiments, such as ant killers!

Have you kicked cola to the curb? Was it hard for you to stop or are you still not ready to give it up?