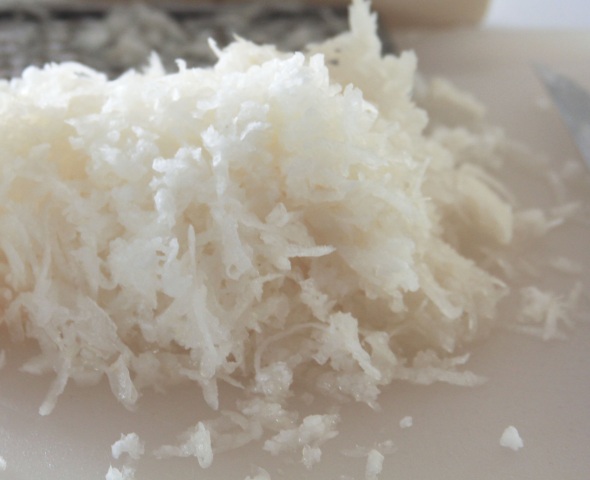 The Daikon radish goes by a number of names depending on where it is being grown. The term “daikon” comes from the Japanese and literally means “large root.” It is also called the Japanese radish, Chinese Radish and lo bok, among other names. The root vegetable is best known for its connection with Japanese culture although it originated on the mainland of Asia.

The daikon is a white radish that grows in a variety of shapes, depending on the variety. Some varieties produce a long slender root while others feature a rounder root that appear more like a large white standard radish. The leaves are long and form on both sides of stems that grow from the crown of the root. The leaves resemble a dandelion plant and are edible.

Harvesting and Cooking with Daikon

The daikon radish should be harvested before the leaves begin to mature. Plants left to grow too long often result in a woody texture with a strong taste. Remove the roots from the ground utilizing a garden fork or shovel. Trim the greens or leaves before storage. Wash any soil from the roots before utilization.

Daikon radishes are consumed raw, pickled and sometimes cooked. Some raw uses include adding shredded daikon radishes to ponzu to form a dip. It is shredded and simmered with other ingredients in oriental dishes such as oden.

The Chinese utilize daikon in several dishes including the rather improperly named turnip cake. Korean chefs produce nabak kimchi, soup made from daikon and other vegetables and spices. Philippine cooks also produce a soup known sinigang.

Several cultures utilize the greens or leaves of the daikon radish. These leaves are often harvested at the same time the root is lifted. Only the leafy portion is used with any hard stems discarded. The leaves can be cooked like any other green.

Fresh daikon radish roots can be kept in cool dry places for up to two or three weeks without problems. Trim the leaves from the roots before storage. Shredding the roots and dehydrating is a common oriental method of storage and can extend the life of the roots for months, depending on storage conditions.

Daikon is a relatively low calorie content. Consumers generally considered a healthy food with a high content of fiber for its caloric content. This is important for consumers watching their diet in an effort to reduce or control their weight. The radish is known to contain vitamin A.

Here’s a picture of one in the store as you find them: Picture of Daikon

What is your favorite way to prepare daikon? Check out these Daikon Recipes at Your Lighter Side?