Anti-Glycation: the Next Level in the
Battle Against Aging
Things Everyone Should Know About the Effects
of Sugar on Skin

Most people today know antioxidants to be an effective method of fighting age, but few are aware of the biological process underlying for most skin damage – and what directly addresses the problem, says skin-care expert Ron Cummings.

“The word that has been on the minds of dermatologists and other skin-care researchers for many years is glycation, which is what happens on the cellular level to age our skin,” says Cummings, founder and CEO of AminoGenesis Skin Care, (www.aminogenesis.com).

Glycation – damage to proteins caused by sugar molecules – has long been a focus of study in people with diabetes, because it results in severe complications, such as blindness and nerve damage. People with uncontrolled diabetes have excess blood sugar, so they experience a higher rate of systemic glycation, he says.

“Antioxidants fight inflammation caused by free radicals, which are largely created from external, environmental factors such as excessive sunlight or cigarette smoke. Glycation, though, damages from the inside out.”

Using antioxidants and topical moisturizers are a good start to keeping the effects of aging at bay, but they only go so far, Cummings says. Even more important is reversing the damage to skin caused by glycation, which became possible only recently.

Cummings shares two points anyone interested in skin care should know about glycation:

• Glycation is the skin’s No.1 aging factor. Sugar molecules in our body bombard our cells like a ferocious hail storm, bonding with fats and proteins. The proteins then become misshapen and excrete exotoxins that disrupt cellular metabolism. Collagen, which makes skin look smooth and plump, is a protein that’s particularly vulnerable to glycation. The damage manifests as wrinkles, lines, discoloration and edema. Rather than attacking a cell from the outside, like a free radical, glycation occurs from within.

• Anti-glycation topical solutions have been clinically shown to be effective. Old lotions, from your favorite moisturizer to Grandma’s secret facial solution to the new DIY recipe you found online act as a barrier to moisture evaporation. But their effect is temporary, and they don’t prevent or reverse damage. New anti-glycation formulas, however, directly address aging by releasing the sugar molecule’s bond with protein, allowing the cell to return to its natural shape and state.

“Just as antioxidants have revolutionized anti-aging efforts around the world, anti-glycation will be understood to be exponentially more effective,” Cummings says. 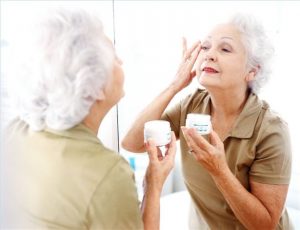