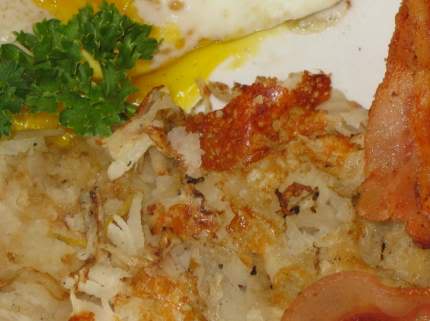 Pictured: Latkes, which are not melon dreidels, but I never snapped a pic of the dreidels. I ate them.

Who says a dreidel must be fashioned from clay?
Low on the glycemic load and index, this treat is colorful and fun!

Cut melon into 1″ X 2″ bricks (1 per dreidel). In the last inch of the length, carve to a point with four sides.

With a toothpick, carve nun, gimel, hei, and shin on each side (food coloring could also be used to draw the symbols).

which together form the acronym for (Nes Gadol Haya Sham – “a great miracle happened there”). These letters also form a mnemonic for the rules of a gambling game played with a dreidel: Nun stands for the Yiddish word nite (“nothing”), Hei stands for halb (“half”), Gimel for gants (“all”), and Shin for shteln (“put”).

Insert toothpick in each and serve up the fun!
Note: Can also be made from cheese.
Rules of Dreidel
The code (based on a Yiddishversion of the game) is as follows:

Remember: The game of Dreidel doesn’t require traditional gelt. Substitute with real pennies or counters instead of the high-in-sugarconfection.