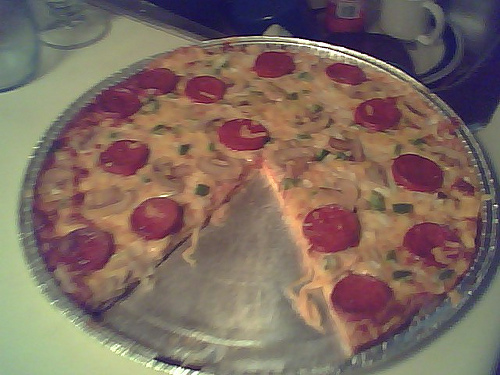 This recipe was passed along by a friend (H2O Goddess) who posted at a same forum as I did. She shared these incredible images and I said, “What?!” She has graciously agreed to share here recipe with everyone.

picture and recipe: H2O Goddess… a metawoman in more ways than one!

Oopsies make a GREAT pizza crust! I used the original recipe as per Cleo’s instructions. (Kind readers, the original oopsie recipe can be found here!)

3 large eggs
1 pkg Splenda
dash of salt
pinch of cream of tartar
3 ounces cream cheese (not Tbsp!) Do not soften!

Separate the eggs and add Splenda, salt, and cream cheese to the yolks. Use a mixer to combine the ingredients together. In a separate bowl, whip egg whites and cream of tartar until stiff (if you’re using the same mixer, mix the whites first and then the yolk mixture). Using a spatula, gradually fold the egg yolk mixture into the white mixture, being careful not to break down the whites.

The only think I did differently was that I added some Italian seasoning to the egg yolk mixture just before folding it into the egg whites. Once folding the yolk into the whites, I spread the mixture into well-greased (I used butter) full-sized pizza pan (I used an aluminum one), slightly patting the mixture down with a spatula just to ensure even coverage of the pan. My apologies, I didn’t think to take a picture of it before I put it in the oven.

Stuck the “crust” into a preheated 300 degree oven and baked it for 20 minutes.

After removing the crust from the oven I stuck it in the fridge for approx 7 – 10 minutes to let it cool down before I added the tomato sauce. In hindsight I suppose you really don’t have to cool it in the fridge. The crust really does hold up very well.

After adding the tomato sauce and cheeses and all the other toppings I stuck the pizza back into the oven and increased the oven temperature to approx. 400 degrees and baked it for another 30 minutes or until the cheese started bubbling.

The crust was extremely pliable and as you can see from the photo I had no problem at all eating it with my bare hands. It wasn’t greasy or messy in the least. It looks and feels just like real pizza crust even on the bottom. It was just like eating “real” pizza, honestly. It was very, very, VERY good. I ate two huge slices…lol. My mother, who isn’t low carb at all, happened to be around and I gave her a slice and she thought it was delicious too. I have a nice sized slice in my lunch bag at work today and can’t wait until lunch time.