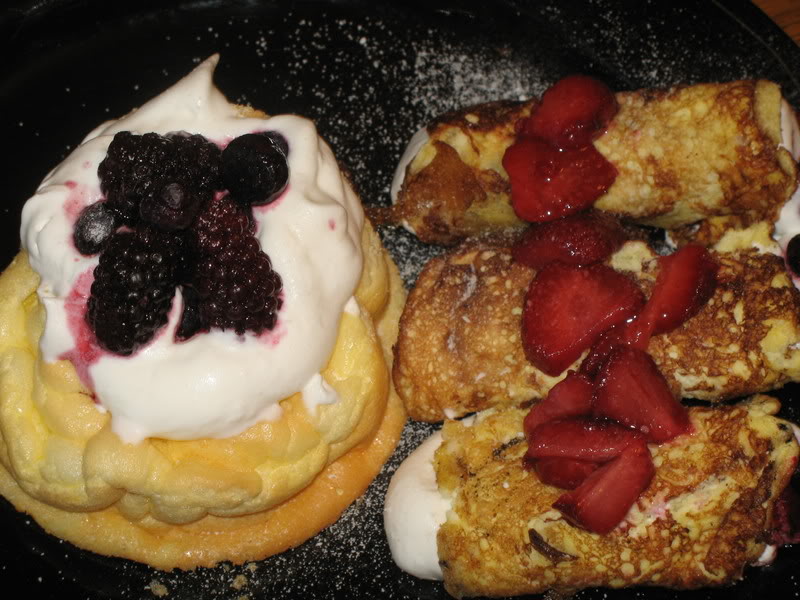 Note to self: Pictures are Good. Don’t forget pictures. Top: Crepes with Angel food cake. As you can see, the recipe is exactly the same for the two items, but look at the difference! I’m happy to report that they were a hit! Middle: Angel Food Cake on its own, as a cross-section. I could only eat half of one because it was pretty filling. Look at how wonderfully the cream fills the middle. It was delicious!

I know, true low-carb believers and gluten-free friends. You’re like “First of all, she’s back posting on a tear,” and second of all, “I wonder how to make my hair smell like berries.”

OK, maybe not the second bit, but I have been finding that as we’re winding down, the soothing qualities of being in the kitchen help to keep me sane. I can make stuff, touch stuff, sniff stuff. For me, it’s like a hands-on Paint Your Wagon fun time, coupled with whipping creams, berries and other fun things.

Gluten-free, and very low-carb (which means low glycemic load), the only think the induction folks from Atkins will have to stay away from is the berries (you’re allowed three ounces of fresh cream in induction according to the 2002 DANDR).

**Edited to add: I used the Mini Wilton Non-Stick Angel Food Pans (can be found at Super Target, 2 per pack). These are roughly 5-6″ in diameter.

Quick, easy, and surprisingly light, but cakey and delicious, these make a wonderful dessert, breakfast, or light lunch. You might even surprise friends at tea with how healthy and gluten-free these small cakes are!

So pretty and tasty you’ll want to eat the entire thing, but so filling, you may only make it through half (if so, halve your nutritional values).

3 eggs, separated
3 ounces cream cheese
1 tsp baking powder
1/8 tsp cream of tartar
1 packet Splenda
2 Tbsp Davincis Vanilla Syrup (Sugar Free)
1 cup whipping cream
3 packets Splenda
Frozen berries
Preheat oven to 300 degrees.
In a bowl, whip egg whites with cream of tartar until peaks are stiff (about 5 minutes).
In separate bowl, blend cream cheese, yolks, cream of tartar and davincis sugar free syrup. Adding half of the yolk batter at a time to the whites and using a tall spoon (I use an iced tea spoon), make a lazy sine wave through the batter once. Turn the bowl 90 degrees and repeat. Add second half of the yolk mix and repeat sine wave two more times.
In each non-greased pan, carefully spoon ¼ of the batter, spreading about the edges. (If you only have 2 pans, you can refrigerate the batter for the next round.)
Bake for 30 minutes. Remove pans from oven and let cool on a cooling rack.
When ready to serve:
Arrange cooled cakes on plates.
In a bowl, whip heavy cream with two packets Splenda until still peaks form. Spoon cream into the center of each mini cake. Tuck fresh fruit in and on the cakes. Sprinkle one packet of Splenda along the top (optional).
Refrigerate leftovers.
Makes 4 mini cakes.
Nutritional information:Calories: 218
Carbohydrates: 6
Fiber: 0
Net Carbohydrates: 6
Protein: 7.5 grams
Fat: 18 grams