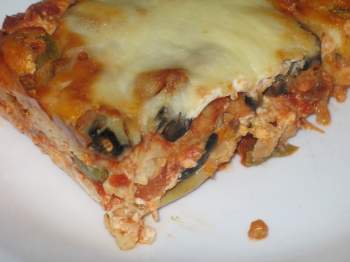 You know how I loves my Bravo shows. I watch The Real Housewives in almost every iteration (sorry, Miami. You kinda sucked), Top Chef, Top Chef Masters, Platinum Hit, Work of Art, Millionaire Matchmaker, Million Dollar Listing, Flipping Out… I’d even watch Brittney Spears wash her underpants and hang them on the line with her Cheeto stained fingers if it was on Bravo. Andy Cohen–call me.

So when my sweet baboo saw Rocko’s Dinner Party and noticed a clever chef ho bring on the zucchini lasagna, my husband looked at me like he wanted to cuddle. This was the conversation:

He said, “Will you make that for me?”
I responded, “The zucchini lasagna?”
“Yeah. Did you know that even existed?”
“Yes. I’ve been doing the low carb thing for some time now. What about my cauliflower noodle recipe version? It’s well-known, you know.”
“I really like zucchini.”
“Mine is well-known, you know.”
“Zucchini is what I really like.”
“Mine’s made with cauliflower. And it’s well-known. Did I mention my recipe is a hit?”
“I’m just not a huge fan of cauliflower.”
“And I thought I knew you!” I mock swooned over my fainting couch.
Eye roll.
“Fine. So how about this: I make the zucchini into noodles, a la my cauliflower noodle recipe.”
“No. I just like zucchini as it is.”
“Philistine.”

So I went to the store, licked the freezer glass where the frozen cauliflower awaits my next recipe, and grabbed two zucchinis, some fresh mushrooms and whatever else I wanted to go with my husband’s wishes.

There’s nothing fancy or foofy. Just zucchini as noodles. No reinventions, no towers made from vitamin-A infused vegetables in a frozen state, no vats of bacon. I dare say it was almost refreshing. Almost. It seemed a little too easy, but he loves the results, and I have to admit, while I’m not generally a fan of vegetables I can see and taste, I think this one’s a winner.
Zucchini Lasagna

Add jar of sauce. Add just enough water to the jar to slosh around to get the rest of the tomato goodness (about 1/4 cup) and add liquids to the pan. Simmer until liquid begins to boil. Turn heat to medium low and allow sauce to cook down/thicken, about 15 minutes.

In a separate bowl, combine cottage cheese, Parmesan and chives. Set aside.

In a 12X12 casserole pan, arrange layers as such:

Bake at 350 degrees for 25 minutes, or until cheese begins to bubble and turn slightly golden. Allow to cool for 10-15 minutes to allow to set prior to serving.