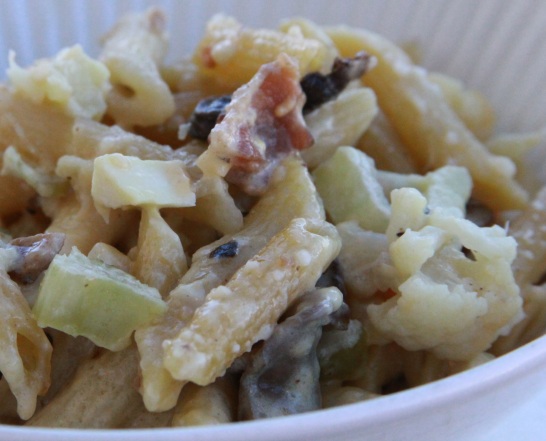 Now hang on. It’s not this Friday:

We’re talking about something with questionable taste that’s more of a mash up.

Ah. I can see by the confused look on your face I’m still not being clear enough.

So I’m like, hey. Anyone can cook something, but it takes brass ovaries the size of Stephen Hawking’s brains (I’m positive he has many) to just toss stuff into a pot and bake it and then eat it and post it here for you, avec* recipe.

Granted, there’s nothing like a visual of ovaries, Hawking and dinner.

Salivating yet? Don’t feel bad. I was afraid to open the oven door, too. I mean, I just threw salad, a mushroom bacon cream soup and some Dreamfield’s Pasta together and added some incredibly bad-tasting smoked cheddar cheese (what sounded like a great cheese in theory ended up tasting like Burger King’s bellybutton smegma).

Really, you want to cover for several reasons: 1. the noodles have to cook. They’re raw right out of the box, so you have to smother the lot with as much liquid as possible. 2. You want to cover the pot because you don’t know what kind of smells are going to come from a pot that you remember contains the possibly unfortunate combination of pickles, heavy white cream and hard boiled eggs. And the smoky cheddar. Never forget the smoky cheddar.

Here is the finished result of your four ingredient dish: (I say four ingredients, because when you’re tossing stuff out of the fridge, each container counts as a whole ingredient. I’m smart!): I also wonder how many sentences ending with punctuation colons I can lace together:

And the taste? Let’s just say while pickle is initially unforgettable (it does mellow with time), thankfully I forgot about the smoky cheddar. Surprisingly, this dish is absolutely better after a few hours when the flavors have a chance to chillax. What started out as pickle surprise (Snooki would be so pleased) has ended up as a decent, texturally interesting mellow dish that vegetarians would probably really appreciate (especially if they pull the bacon). The soup hydrates the noodles and leaves behind the delicious bits of mushroom and bacon to mingle with cauliflower, red onion and bell peppers. I bring to you, without further flourish:

2 cups potatoless potato salad
2 cups cream of mushroom bacon soup
1/2 cup of the gnarliest cheese you have in the fridge (make sure it’s cheese. If it’s green it might be fruitcake from last Christmas)
1 box Dreamfield’s Penne Pasta, unprepared

Preheat oven to 350 degrees F. Without thinking about what you’re mixing together, stir salad in with soup in a 6 quart baking dish. Add cheese. Add noodles and toss.

Cover dish and bake for 30 minutes or until the smell of pickles makes you question why the hell you’re doing this.

*That’s French for “with” for us classy hos.