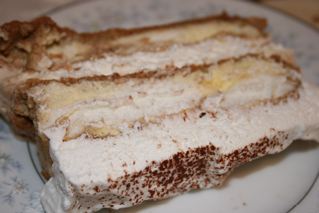 This dessert is absolutely gorgeous and is something you would definitely be lucky to find in a fine restaurant. Marymc outdid herself on this recipe!

Okay, set aside about a cup or so of your morning coffee, or make some from instant, but either way, let it cool down. Take your favorite Revolution Roll recipe (Cleo’s Oopsie would be an excellent choice) except add a teaspoon of vanilla and extra sweetener in with the yolks and cream cheese. I sweetened this one with one tablespoon of the DaVinci’s Delce de Leche and it was nowhere near sweet enough, so next time I may just do the Sugar Twin or Splenda instead, or add extra DaVinci’s. Blend together the yolks, vanilla, sweetener and cream cheese (or whatever you’re using) and of course, whip up your whites with the cream of tartar. I had doubled the original Dr. Atkins RR recipe, but it was really a bit much and made for a pretty thick “cake.” Maybe could have gotten by on a single recipe for a thinner layer. Fold the yolk mixture carefully into your whipped up whites as usual. Butter up a long (10 x 13” or so) baking pan really well and spread your batter in there, smoothing out the top. Bake at 300 degrees for about 45 minutes. I swear this smells like a cake baking!! Remove from the oven and let it cool thoroughly.

Once cooled, whip up about a cup of heavy cream, with sweetener – again I used DaVinci’s Delce de Leche, 2 tablespoons this time, and this was really good. I folded in some sour cream that I made out of pureed cottage cheese and lemon but think using mascarpone (which I will buy next time I try this) or even more cream cheese or store bought sour cream would’ve been much better here. The sweetness in the whipped cream was good with the 2 tablespoons. When your RR cake has cooled, slice it in half down the center and then divide each half into 8 fingers (4 long sections then sliced in half).

Butter a loaf pan and then line it with parchment paper, leaving some excess over the sides so that you have some handles to pull the dessert out with later. Using a hand held sieve, sprinkle a little bit of cocoa on top of the parchment paper. Quickly dip each cake finger into the coffee and layer them in the bottom of your pan. Spread some of the whipped topping blend on top of the cake fingers and sprinkle more cocoa on top of the cream layer. Continue layering with more coffee dipped fingers, whipped topping, and cocoa, for 2 to 3 layers (depends on your loaf pan size) and ending with a sprinkling of cocoa on top. Refrigerate overnight. Carefully lift dessert out of the pan, slice, serve and enjoy!

**notes: It looks pretty good doesn’t it? Well, the “roll” part needed to be much, much sweeter, so I ended up sprinkling some Sugar Twin on that slice you see (which ended up being my breakfast ), and it needs some other tweaks and improvements, but that may take some time. I’m not sure of the carbs yet but this isn’t something I want to make a major food group or anything!! So, in other words… it’ll be awhile before I experiment with it again. Here’s what I did.