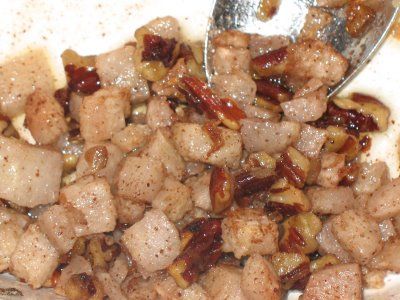 I am serious. I have been in the kitchen today because I have a jicama I wanted to try out. So I pick up this vegetable root about the size of a softball on steroids from the big Wallymart and decided to make it into various things.

I could have fed an entire third world nation on one of those things. There were easily 4-5 cups of shredded veg there. I ended up with about 8 hashed browns, hash (not marijuana, you Boulderites), and enough left over to decide that jicama makes a pretty mediocre apple pie substitute.

That and I sampled so many jicama variations today that it’s still stuck in my throat like a vomit burp (I’m all class, baby!).

I’m, going to grab my pictures to show you what I ended up with. *playing elevator music*. See, the lame thing is that as I’m typing this, it’s all happening. Of course, you’re going to see pictures first so what the heck. Just consider yourself lucky you didn’t have to hear the whole musak rendition of David Lee Roth’s “Jump” in the interim.

OK, so while I’m at it (because I’m ADD) I’m making a flax cracker because I had an idea. (I know. The brain works. OMG)

Oh! Guess what! I want to say that since kicking all aspartame to the curb, no more facial numbness! YES I KNOW! If it wasn’t me, I’d think this was an X-Files conspiracy episode. I am feeling GREAT since changing to stevia. Now trust me when I say there have been some Pamprin moments. You take away honey’s Diet Coke and honey gets crabby.

Microwave! Be right back.

The pictures are of the mock apple pie filling I made with the jicama. I have to say it’s not that that bad, but there are some caveats. Jicama never softens. Like ever. I think Posh Spice’s outie bits finally have a contender in things not likely to go soft during a nuclear holocaust.

I added cream cheese to the mixture up top and ended up with something that rocked my socks on a flax cracker (bottom picture).

I am considering giving you the recipe, but if you hate it, you can’t pummel me around the head with shoes. Unless they’re cute shoes. In, oh, a size 8.
Need something with your oopsie danish? Want a sweet topping to oatmeal or a flax cracker? This recipe is easy to make and has the consistency of a granny smith apple in baking.

Mock Apple Danish Spread
One cup jicama cubed (1/4″ cubes)
1/4 cup chopped pecans (optional but fun)
nutmeg
cinnamon
2 Tbsp butter
2 packets stevia (or Splenda)
1/2 cup cream cheese, softened
Preheat oven to 350 degrees Fahrenheit.
Chop jicama into small cubes. Toss with sweetener, cinnamon and nutmeg (and nuts if you’re adding them) in a small, ungreased covered casserole. Toss butter on top. Cover and bake for about 50 minutes, stirring every 10-20 minutes to redistribute flavor and butter.
Once jicama is golden/cooked (note: it will not soften, so relieve yourself of that notion right now), remove from oven and mix with cream cheese. Refrigerate, covered.
To serve, heat spread for 20 seconds. Serve on flax crackers..
Note: The texture of the jicama is akin to a semi-crunchy granny smith apple.

This is not induction-friendly unless you nix the pecans.

For more info: Preparing for the holidays? Don’t wander. Thanksgiving ideas for a fun and delicious holiday season are coming soon!