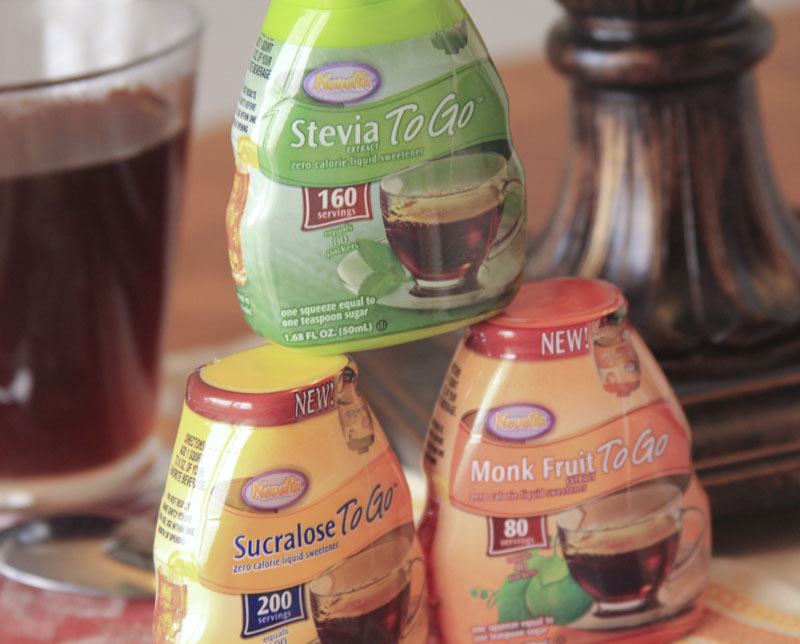 It’s so nice to be able to stick a liquid sweetener in your purse and run out the door knowing that wherever you end up, you can sweeten your coffee or tea without worrying about what you’ll be able to find. Nevella sells their sweeteners throughout WalMart SuperCenters, which make them an easy-to-locate product, and for a reasonable price. Simple grab your favorite sweetener choice, from sucralose, to stevia, to monk fruit, and you’re golden.

How do each of these sweeteners measure up?

That’s where it gets a little iffy, literally–at least in terms of measurements. Each container claims the same thing: A squeeze is equal to 1 tsp of sugar.

But  how much is a squeeze really? Is it the amount released in a second? It would be more helpful to read “20 drops” or “1/8 tsp”.

As well, the Monk Fruit requires twice as much sweetener than the sucralose and the stevia, yet they all say a “squeeze”. From this, you pretty much infer you squeeze each one the same amount, and that’s not true, since the monk fruit claims to require .6 grams of squeeze, while the stevia and sucralose only require .3 grams per squeeze. But even though the Sucralose and the Stevia both claim a squeeze equals .3 grams in weight, the Sucralose to Go claims 200 uses, while the Stevia claims to contain only 160 uses (and they both contain the same amount of liquid per container). I am a stickler for this stuff.

Have you tried these sweeteners? What did you think? I’d love to hear from you in the comments below!

Requiring about twice as much to sweeten as the Stevia or the Sucralose, don’t let that niggling detail cause consternation; this  0-carb, 0-calorie liquid sweetener has a nice, sweet taste that derives from monk fruit, a type of small melon that grows in Southeast Asia. 200 times sweeter than cane sugar, the fresh fruit is crushed, infused with water, and then concentrated into an extract. Other ingredients include malic acid, sodium benzoate and potassium sorbate. One of the things I like best? Even after finishing my coffee, I am still enjoying a pleasantly sweet aftertaste.

I want to lead off by saying I’m not a stevia fan in terms of taste, but Nevella did the smart thing by adding erythritol to the mix to help level the flavor out while still packing a nice, sweet punch. If you are a fan of natural sweeteners, definitely consider this as a fantastic, portable option. If you love stevia, you’re going to love that this product is derived by steeping stevia leaves in the same way one steeps a tea at home. The result is a sweetener 200-300 times sweeter than sugar, but for 0 calories and 0 carbohydrates. I addition to water, erythritol and stevia, the sweetener contains natural flavors, malic acid, and potassium sorbate. I only rate this one so low because I don’t like the taste of stevia.

A typical favorite for many users, sucralose is an easy-to-find sweetener in many forms, from powder to liquid. In Nevella’s product, the 0-calorie, 0-carbohydrate sweetener delivers a nice, sweet flavor without being overbearing. And because this sweetener (600 times sweeter than sugar) is derived from sugar, its capabilities make it the post popular sweetener available today. And because it’s liquid, you don’t have the powder-bulking agents or the excess carbohydrates; instead, you have water,  sucralose, malic acid, sodium benzoate, and potassium sorbate. The aftertaste isn’t as pleasant as the monk fruit, but I prefer it to the stevia.

Rating: ♥♥♥♥♥
Save: Print a coupon for $1 off your next purchase (coupon).
Usefulness: Anywhere you would typically use sweetener
Found at: WalMart SuperCenters
Website: (See above for each type)

Disclosure: Nevella provided these products  free of charge for review, but this has not affected my review of the items.