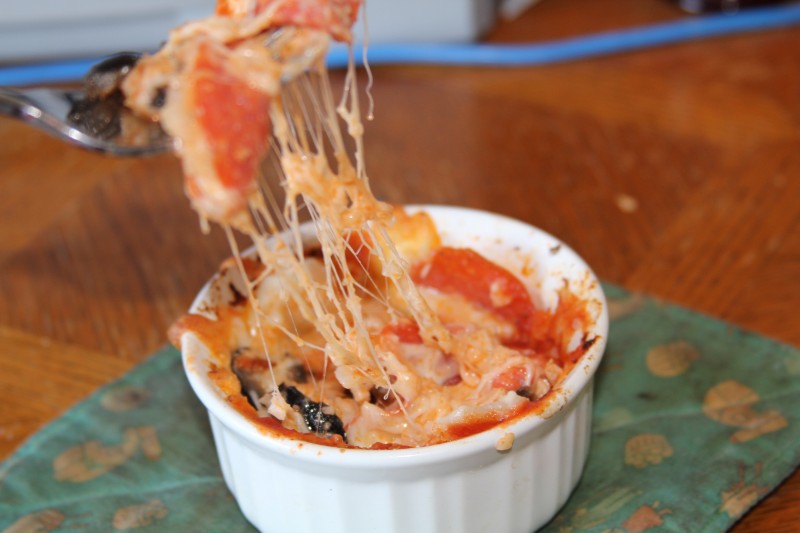 All class, baby. Pizza in a cup.

Have you thought to yourself today, “My Gosh (watch that language, buster!) it’s been too long since I’ve had myself a cup of pizza” ?

Unless you’re Steve Martin, the answer is probably nnnnoooooo.

Pizza in a cup is easy to make, and is essentially anything you want it to be, from schloop in a dixie cup to something baked in a mug, to a ramekin. It’s almost like making a small lasagna minus the noodles, when you think about it. A casserole of the most high kitschy.

[Contest no longer valid] For those out there hankering for a mug o mozzarella, wifezilla is challenging folks to celebrate the Jerkinator with a cup o pizza challenge. The winner gets some cool fridge magnets.

Wifezilla initially promised she’d do her Tom Cruise impression as the original prize, but then reneged stating that the black turtleneck wasn’t Trekkie enough. She then proceeded to say “Nanoo Nanoo” and threw a turnip at my head after braiding her hair into a rat tail and talking like Mal from “Firefly.”

(Is that enough geek? Because I could geek more. I have barely touched the science fiction iceberg my friends. I haven’t even mentioned Andromeda, Babylon 5, Farscape or Battlestar Galactica– D’oh! You tricked me, vile readers! I will get you with my photon torpedoes!)

So show wifezilla your stuff and make me work for those fridge magnets.

Turn ramekin upside down. With a knife, carefully trace the shape of the ramekin onto the cheese to make a circle (if your ramekin is too large, cut two half-circles which will cover the opening). Chop leftover cheese and set aside.

Place in a 350 degree oven for 10-15 minutes, or until cheese is melted and beginning to brown.

Remove from oven and top with chives.

You could go for cute and make a face on top for the kids using black olives.