Pictures by babydollseas. Top: Pizzelles as they appear post-baking; Middle: Cannoli with edges dipped in pistachios; Bottom: Nothing says loving from the Pizzelle maker like cannoli. 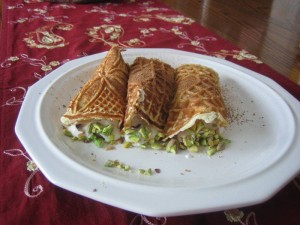 When you started Atkins (or another lower-carb program, or gluten-free plan), you probably fell –swooning across your fainting couch– and lamented how austere life would be minus those foods and little indulgences you thought you would forever be without since nixing the sugar and the flour from your life.

babydollsea, with her grandmother’s pizzelle (Italian waffle cookie) maker, has put oopsie rolls to the test, yet again.

With a mixer, whip egg whites with cream of tartar until stiff peaks form.

In a separate bowl, mix cream cheese with yolks and Splenda until just blended. Gently fold mixture into whites.

Pour into pizzelle form and bake.

3 Pizzelles (as made above)

Spread pizzelles on a work surface.

With the exception of the Pistachios, mix remaining ingredients together.

Fill Pizzelles, each with 1/3 of the prepared mixture. Sprinkle with,or dip ends in, pistachios. Present seam-side down.