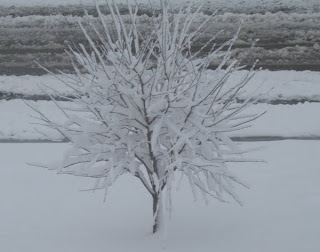 Snow. In Colorado. How unusual.

Only in Colorado is it 70 degrees one day when a deluge of the white stuff buries my car and hopes for a run to Whole Foods in one fell swoop.

O Xylitol and coconut oil. I will have you…


Still, isn’t it pretty sweet looking snow? It broke branches everywhere and left motorists stranded along the roads, and five thousand people were stuck at the Denver International Airport overnight with only dreams of airplane peanuts to warm their hearts.

Aside from that, it was pretty sweet.


I ate some soap…

What dumb words got you in trouble as a kid? I couldn’t say the “f” word. That’s right. Fart. I had to say I had ‘gas bubbles’ or I got into trouble. The time I let loose the real F-bomb at 10, I really got the business.

Hint: changing to ‘sex bubbles’ still has a bad outcome when your memaw is a proper, religious person.

The cheesecake recipe I’ve been working to perfect for the last two years is still on the ‘to do’ list. Through two years of tweaks and changes, it’s getting closer. And man, I love cheesecake.

I put the cauliflower crust together in a day, but a good cheesecake takes time.

I’m working on the cheesecake recipe again and have decided to make the effort to unveil the recipe once our (it’s yours, too) Facebook page hits 1,000 fans. If you’re not there chatting it up with us already, come on over! Lighter Side of Low Carb Page.

I’m also up to no good on another front. Remember, I’m promising something big? Exciting? New? It’s coming! I’m busy behind the scenes working with some amazing people to bring you guys something you’re going to love. Stay tuned for more news coming soon!

In the mean time, what information or ideas would you like to see that’s not already out there, lowcarbwise? Drop me a line at my email address or leave a comment.


Baked salmon is in the oven as I write this. I am not the biggest fan of fish, but only because I was raised with breaded, frozen fish sticks in the 70’s. If it didn’t have a bread or batter coating and wasn’t shaped like a parking spot curb, it didn’t make it into my mouth.


It took me some time to even make eye contact with the real thing years later at the local grocer. Bright pink, and feeling pretty fleshy, substantial and not processed, it was another few months before I could actually touch it without running around like a second grade girl after touching “boy cooties”.


Now I’m handling big salmon steaks with less ‘squeam’ (still some occasional ‘ish’, drenched in butter and a bit of lemon, sea salt and crushed pepper, touching it like I mean it, and serving it to the family. More expensive than steak, rich and buttery, it fills the stomachs of even the bottomless pits in the form of teenagers and satisfies the innate want for that Pacific fish, remnants of the Northwest in their blood along with their built-in love for cloudy days.


And sports teams with no chance of winning the pennant or the Superbowl.