Still, what if I told you making your own cream cheese is quick and easy and essentially fool proof and would make you feel like the fanciest fancy cheese artisan in all of Cheese Artisantopia? Why, you could even be the mayor. He wears a neat hat and talks in a cool accent and says things like “Pip pip. I like cheese.”

But because I never do everything someone tells me (it’s a curse), I used 2 cups of heavy white cream (instead of the organic whipping cream) in a small metal mixing bowl, placed in about an inch of already hot water on a stove over low heat as my double boiler. While is not a standard double boiler method, it works like a charm (and I just don’t want more specialty appliances/pans in my kitchen). I share more on the double boiler process below.

Another tip? Don’t be afraid to go for apple cider or regular white vinegar in place of lemon juice.

Stirring occasionally with a heat-proof spatula, I wait for the temperature to get to the requisite temperature of 190 degrees, and followed the rest of the instructions at the link. 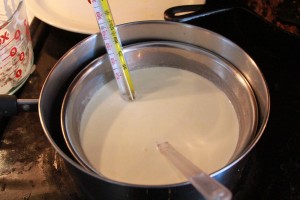 Note the cute candy thermometer and my MacGuyver double boiler of cheapness. Pretty awesome, no?

To remove the mixing bowl from the pan, the trickiest part is not scalding your skin with boiling water (or steam) or spilling your liquids from the bowl. I gently tip the pot slightly and slip a large metal spoon under the side/lip of the bowl to keep it upright enough to grab with a pot holder. Then I carefully lift the bowl out of the pan and let it rest on the counter to cool slightly. Again, be careful not to spill boiling water on yourself or scald yourself with steam of cheese. Third degree welts aren’t a good look.

Once the mixture has the chance to cool per instructions, pour through 4 layers of cheesecloth (I fold mine a few times) and cover in the refrigerator for 24 hours (here, I use clear wrap).

You can find cheesecloth at some fabric stores and places like Ace Hardware in the canning section. I bought a huge sheet because you never know when you might be called upon to save the day with only your wits, the proper nerd t-shirt choice, and your trusty cheesecloth. 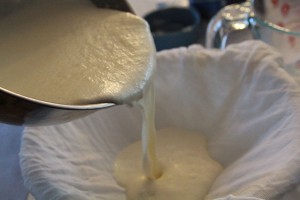 After about a day of draining the liquids, only a Tbsp or so of liquids seemed to drain off into the bowl, even though the recipe says there might be more. Why? Probably because I had enough cheesecloth to super-drape the Statue of Liberty before Labor Day (Rachel Zoe seal of approval), and a lot of the whey absorbed into the fabric. I might have screwed something up, but if that tasty, creamy goodness is a mistake, please never let me get it right.

So let’s revisit: your own fresh cream cheese on demand with no gums, no additives, and only fresh, whole cream, some cheesecloth, and a day of patience. Become your own cheese artisan and experiment with flavors. Who knows? Maybe a cow will proclaim its love for you. It would certainly be mooving.

Oh yes. I went for the cheap pun. Did you expect anything less of me?

One final note: you can wash your cheesecloth on the gentle cycle of your washing machine to prepare it for its next use, allowing your fabric to air dry. Please don’t wash with your kids’ tie dye socks, the dirty underwear, or dog toys. Or your dog.

Use this tasty cheese anywhere creamed cheese or mascarpone are called for, from recipes like these cracker schmears to choconutty bites, oopsie rolls, cheesecake, you name it!

Why limit yourself?
You are the cheese Master of the Universe!