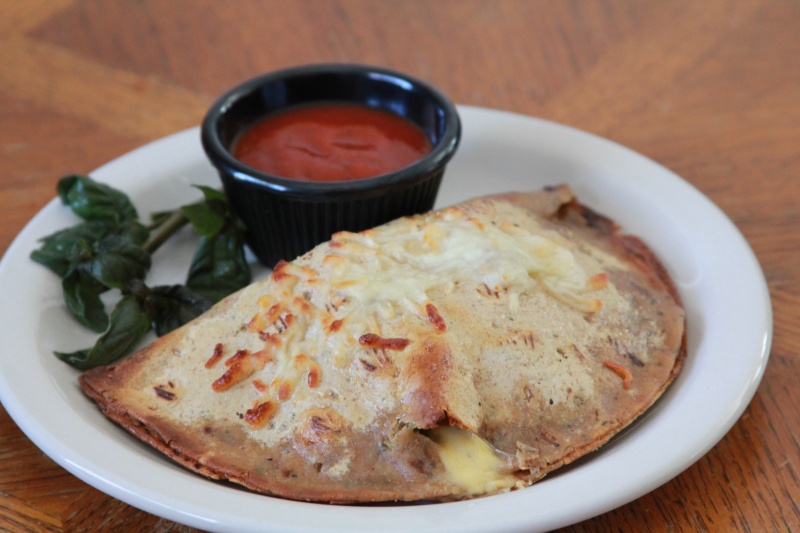 Strombolis are delicious sandwiches folded like calzones and filled with hot, steamy goodness. While most are made traditionally with Italian bread dough, I thumb my nose at convention (with my pinky raised.Why not be ladylike about it?)

Strombolis are baked and then served hot, usually with a dipping sauce. This one is so chock full of fillings I could barely seal it, but after tasting it, my lips sealed the deal. Terrific. I might even share some with you if you stopped by.

It was the mailman. He never knocks twice. Good thing, too. I didn’t want to share with a stranger.

At any rate, the process is fairly easy, but you’ll want to take care to prepare a few steps first.

Heat the pan with a bit of butter and add the SteakUmms. Even when frozen, they cook to deliciousness in about one minute per side. Let rest and cool slightly. Then slice into 1″ strips using a knife or pizza cutter.

In the same, heated pan, add a bit more butter (you know you want to) and saute the onion, green peppers and mushrooms for about 10 minutes over medium heat, or until onions become transparent.

Lay Flat Out on an ungreased cookie sheet. Fold slightly in half so you can eyeball where the stuffing area is going to be for fillings–You don’t want toppings falling out of the sides; it can be pretty messy. Add meat and vegetables to the center back of what will be the bottom half of the shell, taking care to leave about an inch perimeter free. Top with cheese. Gently fold, stretching the bread over the mound of filling.

Using a brush, paint the inside bottom lip of the Flat Out wrap with egg white. This will help the sides adhere together. Press gently. (Don’t worry if they don’t adhere immediately. Just try again.) Once edges adhere, paint the top of the shell with egg white. Top with less than 1/4 mozzarella.