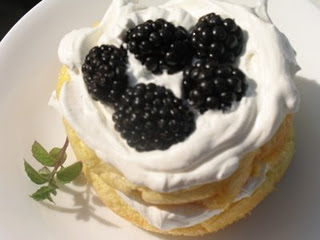 The shortcake medium? An simple, gluten-free, low-carb cake batter using my new favorite sweetener, stevia (no worries, Splenda fans! I have something for you, too!).

Though not Atkins Induction friendly, due to the addition of fruit, this recipe is easy, quick, and sure to delight on sweltering summer days.

If using a pan, grease. If using non-stick, make sure pans are clean and ready to go.

In one mixing bowl, separate egg whites from yolks. Add cream of tartar to whites and whip until stiff peaks form, about 5 minutes.

Carefully add half of the yolk mixture to the whites. With a tall, slender spoon, make a lazy S through the mixture one. Turn bowl 90 degrees and repeat. Repeat with other half of the yolk batter.

With a large spoon, evenly distribute batter between 8 small cake pans* or into 8 piles on a greased cookie sheet. Bake for 30 minutes. Remove from the oven.

Let pans rest for 5 minutes on a rack, and once the small cakes have shrunken from the sides slightly, carefully nudge from the pans very gently. I use a spoon (careful not to scratch your non-stick surface!) Do not allow cakes to cool in the non-stick pans or they have a tendency to stick.

In a mixing bowl, combine whipping cream and sweetener.

Refrigerate remaining whipped cream (but should be used as it is whipped for best results).

To assemble the shortcakes:

Place a cake layer on a plate. Top with whipped cream. Carefully press down the next layer. Add more whipped cream, and top with a few, plump blackberries.