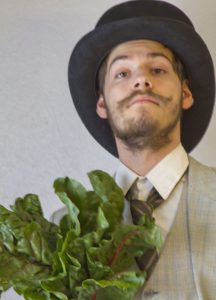 Swiss chard is probably the perfect vegetable for people who don’t want to mess around with spinach.

With its pretty, with scarlet, pink and yellow stems that contrast wonderfully with its green leaves, Swiss chard is such a beautiful plant that it’s being used as a border plants and house plants.

Swiss chard is a cool weather crop, but it can stand higher temperatures than spinach. Spinach defeats plenty of inexperienced gardeners because it tends to bolt when the temperature rises just a few degrees above normal. On the other hand, Swiss chard can stand temperatures down to 7 degrees F. It also has a mild, delicious, pleasantly bitter flavor.

Swiss chard isn’t from Switzerland, but from Sicily. It’s descended from the sea beet as are cultivated beets. People started calling it Swiss chard so they wouldn’t mix it up with French spinach. Go figure.

Swiss chard is not only easy to grow but is incredibly nutritious. It’s chock full of antioxidants including kaempferol. Researchers believe kaempferol is good for heart health. Chard also contains syringic acid which has been shown to regulate blood sugar. It also has an eye-popping amount of Vitamin K, Vitamin A and Vitamin C.

Swiss chard seeds should be planted in the spring as soon as the ground is workable. Another crop can be planted in the fall in mild climates. Swiss chard can be grown in full sun or partial shade. Another good thing about Swiss chard is it’s not very fussy about soil conditions. Just make sure the soil has some rotted compost or manure mixed in. Rows should be spaced around 15 to 18 inches apart. When the seedlings pop up, thin them to eight to 12 inches. The thinned plants can be eaten as greens or even sprouts. Swiss chard chard can be harvested all through the summer. Make sure to water the plants thoroughly, especially if a drought hits.

When it’s time to harvest, cut off the outer leaves one to two inches from the ground while they’re still tender, but be careful to not damage the remaining leaves. Another good thing about Swiss chard is that it has no devastating pests. Sure, you’ll see some holes in the leaves now and then, but they won’t hurt the plant.

Ready to have a little Swiss Chard Adventure? Then you positively have to try this Swiss Chard with Sausage Casserole (it is so freakishly perfect). In the mean time, share how you like your chard in the comments below!