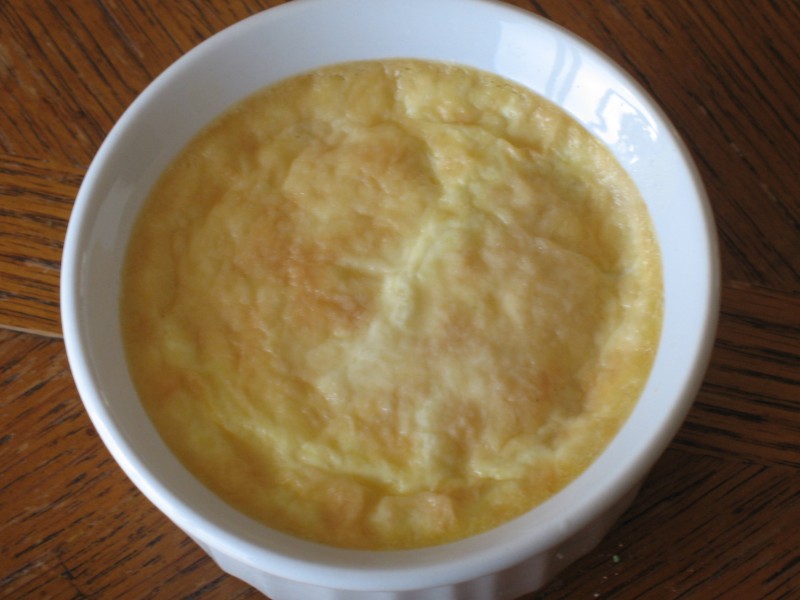 The flan looks better in the ramekin. Trust me on this one.

Flan
1 ¾ cups heavy whipping cream
*1 cup full-fat milk (might be able to sub for more cream)
1 tsp vanilla extract
pinch salt
7 small packets Splenda
1/3 cup Davincins caramel sugar-free syrup
1 tsp ThickenThin/Not Starch
3 large eggs
2 egg yolks
Preheat oven to 350 degrees F
In a heavy saucepan, combine heavy cream, milk, salt and vanilla. Bring to a simmer (barely bubbling) over medium heat. Remove from heat and let rest for 30 minutes.
Combine davincis caramel syrup and thickenthin/not starch in a microwaveble bowl. Heat for 10 seconds at a time, until liquid is hot, but no more than 30 seconds. Stir and let rest on the counter.
Combine eggs, yolks, and Splenda packets in a mixing bowl, mixing until blended. Carefully add cream/milk mixture, blending in slowly, careful not to make a frothy mixture.
In ¾ cup ramekins, pour equal amounts of the caramel mixture. Rotate ramekins to coat sides evenly. Pour equal amounts of custard into each ramekin. Place ramekins in a baking pan and fill to half way around ramekins with hot water.
Bake for 40 minutes, or until centers are gently set. Carefully transfer to a cooling rack to let cool. Place in refrigerator, covered for 8 hours to 2 days. To serve: Serve either in the ramekin, or invert and add a bit more caramel syrup.
Notes: Because this was a splenda recipe, the caramel didn’t remain along the sides as a sugar might (when it recrystalizes due to temperature change back to cool). The caramel actually pooled in bits in the flan and under the crust, which was fun, but it doesn’t produce exactly the same effect as running over the top. It did remain separate, for the most part, however. In this instance, I made another small bowl of the caramel davincis coupled with the ThickenThin and then topped the custard with this.

I would recommend that for this recipe, you might grease a tiny/small pie pan, and not add the caramel until after the recipe has cooked and set.

The taste is quite nice, and the pools of caramel, though, might be worth the added effort of drizzling more on top.

*Not induction friendly due to use of milk; however, if you sub for cream, you’re looking at less than 3 ounces of cream per serving, which would be acceptable.

Nutritional information per each ramekin (3/4 cup):