A recent government report supported lowering intake to 2,300 mg per day, but it cast doubt on whether dropping consumption lower than that would be beneficial. In fact, some reports caution  that a further reduction could 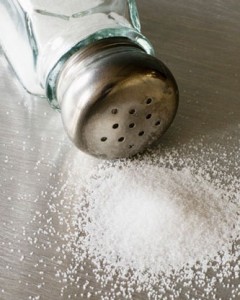 raise the risk of negative health conditions in certain groups.

The American Heart Association recommends stricter limits of 1,500 mg of sodium per day. The AHA reaffirmed that recommendation after the released reports. Current federal guidelines advise the lower limit for anyone older than 50, people with hypertension, diabetes, or chronic kidney disease, and all African Americans.

Researcher’s say consuming less than 2,300 mg per day could increase the risk of heart attack in some people. It was also stated that “reducing sodium from very high intake levels to moderate levels improves health. But… lowering sodium intake too much may actually increase a person’s risk of some health problems.”

The AHA and other groups vigorously deny claims and voiced concerns that it would derail efforts to limit consumption. “it would be a shame if this report convinced people that salt doesn’t matter.”

Sodium is an essential nutrient, necessary for the balance of water and electrolytes and in the good functions of nerves and muscles. High intake is known to increase the likelihood of high blood pressure, which is a risk factor for heart disease. Americans consume about 3,400 mg per day, on average.

So what is your personal experience with sodium and how is affects your health? Please share!