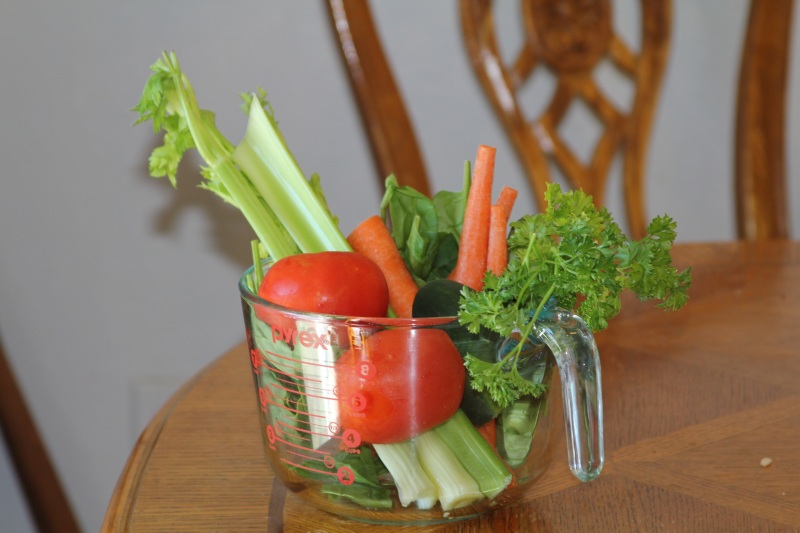 Day two is already so much better than day one was, and I think I know why, based on changing up a few things.

1.    Day one I made one drink with apples, and I can’t help but think the apples killed my sensitive blood sugar and made me extremely hungry
2.    I drank too little water.
3.    The juices were too small and not savory enough.
4.    I went for the protein shake in the beginning of the day and I should have saved it for later.

Day two I was reticent to even begin a new day of juicing. Monday had been a disaster on roller skates. I was tired, hungry and couldn’t get my rodents straight. All in all, I’d say it was more or less of a big, fat, horrible day.

Thankfully, with day one down, and some lessons learned, I’m already off to a better start, beginning with breakfast:

I have to say I’m pretty proud of myself for grabbing the veggies and the herbs for breakfast. And wow. What a delicious difference already, as my taste buds did little doggy paddles of joy across the delectable delights in this glass of juice. I was able to stay full until lunch as well, making me wonder if perhaps the protein shakes could be saved more in case of emergencies than as the first resort. It tasted a lot like V-8, but since I didn’t have the beets, I decided most is better than none.

This juice I totally made up from stuff that had been sitting in the fridge for a long time. You know how everyone says iceberg lettuce is full of water? Don’t you believe it. I got less liquid from half of a head of iceberg than I did from a few handfuls of spinach. I have to think iceberg is mostly cellulose and definitely not worth juicing. I’d rather stick with kale and spinach.

For dinner, I made a juice from the Breville Juicer mini recipes section. To carrots, celery and tomatoes you add an entire lime. I doubled the recipe and only added half of a lime to each, but for the peeling of the lime, you never really even tasted it, so I don’t know that I’d try that again. If I add citrus, I want to be able to taste it–but I also don’t need the blood sugar issues.

And speaking of those, yesterday was MUCH better overall. I actually had energy yesterday to do things I needed to do and had been avoiding the first day due to extreme lethargy. I do admit to accidentally putting some cabbage in my mouth, but I immediately spat it out (lame!). If I’m going to try a plan and the point is to juice, why sabotage the effort?

My sweet baboo was able to stick with it yesterday, and he said he’d actually lost weight, so he’s pretty excited. I know I’m down 8 pounds since beginning, but seeing as I wasn’t exactly a world class dieter up until that point, I’m sure a lot of mine is water weight. I usually lose that much with Atkins as well. Nonetheless, we’ll keep you posted with our weight loss values for these 10 days, starting with Sunday.

Extrapolations of the day: Day two was based on what I’d learnd from Day One. I stayed away from higher glycemic load fruits, drank more water, and saved the smoothie for emergencies, in case I really needed the protein and fat. Guess what. I didn’t need the smoothie. I will say I was literally starving by 10pm, but I was careful to not watch any cooking shows or anything with food ads so as to not exacerbate the issue. I didn’t need the reminder. So, good day: Hungry night. I need to drink more water and possibly go for a protein drink later in the evening. We’ll see what happens tonight.