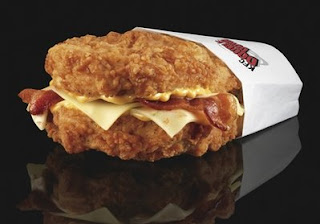 We’ve been seeing them for weeks: Those ads for the KFC Double Down that had America ready to go into a KFC, slap down our five dollah and motorboat those chicken breasts right there in front of the manager and God and everyone.

Maybe I over thought the moment. Maybe the corporate advertising world doesn’t care so long as I paid to take a taste. What I got instead– as I stood in anticipation– was what every teen boy experiences when he gets to second base: a mediocre, awkward moment with a couple of breasts.

We ordered the grilled chicken version of the sandwich and a pair of bird bazooms much smaller than the media images shown were slid to me across the counter (*sings* enhannnciinngg).

“There’s no cleavage here!” I said to my son. The manager covered her chest. A nearby plumber hitched up his pants. But I kid.

The small sandwich chicken itself was juicy and delicious, much better than I had anticipated, with nothing frou frou about the breasts themselves. Straightforward enough. Nonetheless, waggling between the lanky meat melons was one lone, fetal pickle slip of bacon, some sad sauce that looked like bellybutton cheese, and a floppy slice of yellow pepper jack (more jack than pepper). The combination was a flavorless goo that reminded me why society has the baby’s foreskin removed.

Per reports, there wasn’t any of the much-announced sodium that we noticed, but I have this to say:

This was one sandwich that could have used the push up bra post-processing.

In all fairness, results could vary from restaurant to restaurant, but we wouldn’t likely be revisiting this sandwich sans emergency.

KFC Double Down Cost: $5.99 for the value meal
Carb/Calorie Count: 3 carbs/460 calories
Ingredients: KFC® Grilled Filet or Tender Roast® Chicken Filet, Colonel’s Sauce, Bacon, Pepper Jack Cheese, Monterey Jack Cheese. I sensed possible MSG in the Colonel’s Sauce.
Flavor: Juicy tender breasts, but insides were lacking in flavor
Texture: The chicken was fabulously cooked, but the insides were slippery as snot on a porcelain doorknob and about as flavorful
Usefulness: Perfect if you’re in an emergency food situation and need to eat. Have them hold the sauce and see if they’ll double up the cheese and bacon
Found at: Kentucky Fried Chicken
Website: https://www.kfc.com/